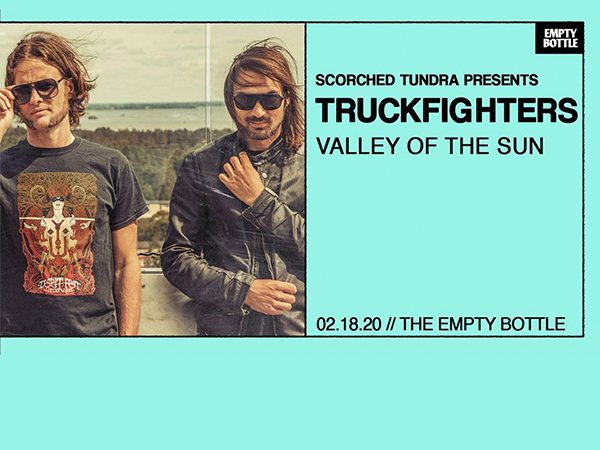 On Wednesday February 18th Sweden’s legendary Fuzz/Desert rock trio Truckfighters will be returning to Chicago for the first Scorched Tundra co-promoted show of 2020.  The band will be marking its Empty Bottle debut by performing their iconic album Gravity X from start to finish.  They will be joined by Ohio’s Valley of the Sun. Truckfighters has a long history with Scorched Tundra, having headlined ST III and ST VII in Gothenburg.  We look forward to welcoming them to Chicago and celebrating fifteen years of Gravity X and nearly twenty years as a band!  Advance tickets are $20 ($25 at the door). Doors will be at 8:30.  The Empty Bottle is cash only and 21+.

Grab Tickets for the show HERE.

More on the bands:

Founded in 2001 in Örebro, Sweden, TRUCKFIGHTERS have become a fundament in the ‘stoner rock/metal’ sub-genre with fans all over the world. With the two founding members Dango and Ozo as the intact core, with a number of drummers coming and going. If ever there was any doubt, this time off has shown the band who they really are. Feeling a need to play enough shows to satisfy the inner urge without losing motivation. It is safe to say the touring will be less frequent than the most intense years of the band. Just as safe as is it to say that the shows will be better than ever and as always with a hell of a fuzzy sound!

There is a smoldering hotbed of rock and roll in the most unlikely of places: Ohio. Some time ago, the Devil came to sew his seed throughout the state leaving every city with its own High Priests of Hellish Riffs. The congregation of Cincinnati’s Church of Rock and Roll is watched over by VALLEY OF THE SUN, and a well tended flock they are. Riff after righteous riff is thrown from the pulpit with the fury of fire and brimstone, so come out to the Rock and Roll Revival , bring your offering and prepare to be anointed!

Listen to Truckfighters and Valley of the Sun on the player at the right or by clicking their names.